Congressman Vapes During Hearing to Protes Ban of Ecigs on Planes 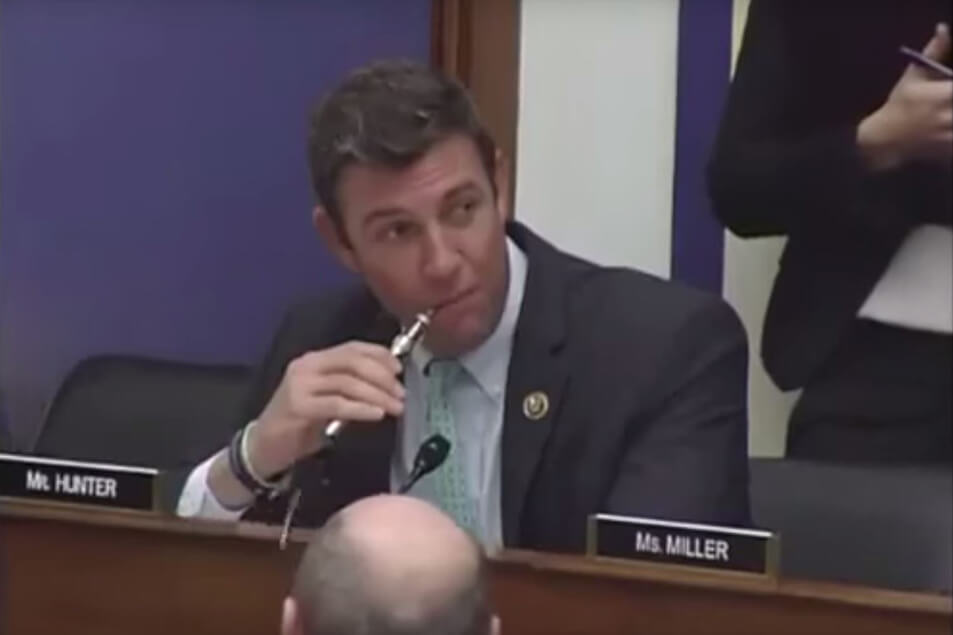 Talk about using examples to make a point. Just last month, California representative, Duncan Hunter, used his own electronic cigarette, or e-cig, in the middle of a passionate debate regarding the potential ban of ecigs on planes. Hoping to demonstrate the safety, benefits, and casual nature of using ecigs, Hunter nonchalantly used his own vapor pen to drive his point home.

"First, I'd like to say this," Hunter began, pausing his sentence to take a quick drag from his electronic cigarette. Upon exhalation, Michigan Representative, Candice Miller, waved away the small cloud of vapor, while the audience laughed. Hunter continued.

In an effort to help showcase the popularity and universality of ecig products, and able to potentially reach a larger audience than cigarette smokers alone, Hunter went on to explain that the inhalation of vapor to deliver a substance to the body was not limited to nicotine only.

He's not wrong there--already there have been developments in the market of inhalable treatments. Inhalable medicines for pulmonary diseases are leading the race, and the FDA has been presented with inhalable anti-psychotic and migraine medications for review. In December of 2015, Alexza Pharmaceuticals released clinical trial results for a drug administered by inhalation that would effectively treat epilepsy.

The California congressman had hoped to sway the decision of his fellow lawmakers to ban ecigs on planes, but, despite his best efforts, the amendment was adopted with a vote of 33-26. A majority of airlines already have measures in place banning the use of e-cigs in flight, and do not allow you to carry them in your checked baggage, due to the lithium ion batteries inside most of them.

The FDA is also working to determine what sort of quality control and regulations go into the production of e-cigarettes and their juices, citing, "Analysis of the electronic cigarette samples showed that the product contained detectable levels of known carcinogens and toxic chemicals to which users could potentially be exposed."

It's unclear whether huge strides will be taken in the advancement of more public e-cigarette use, but as long as there is vaping, there will be avid supporters looking to end all restrictions. And why wouldn't they? Most vapers all seem to share the same beliefs and anecdotal evidence regarding the improvement in their health. In December 2015, Hunter wrote an editorial for The Hill regarding vaping.

He wrote, "The reason I vape is simple: It’s so I don’t smoke cigarettes. I vape knowing that I’m not inhaling tobacco. Most importantly, I use a vapor pen because I believe it could save my life."