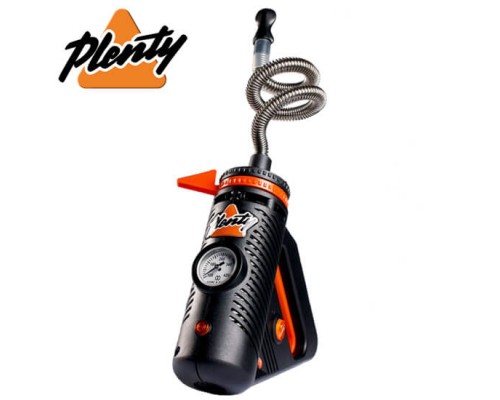 Plenty of vapor, benefits and value. That's exactly what you'll get from the Storz and Bickel Plenty Vaporizer. Constructed in Germany by the same people who brought you the Volcano, this dry herb vaporizer is unlike anything else on the market today. The Plenty Vape is another unique desktop product - so small and portable that it could almost be a portable, but it definitely has the power of the a desktop vape!

The Storz & Bickel Plenty operates as efficiently and effectively as a desktop vaporizer; however, this device is made to fit in your hand, not rest on the table. Weighing less than 1.5 pounds, it is easy to grip and features a very comfortable mouthpiece. There are no bags to fill and no whips to contend with, just large, thick clouds of pure, pleasing vapor to draw.

Putting a new spin on classic whip-style desktops, the Plenty from Storz & Bickel has a unique handheld design which differentiates it from every other model in its class. Instead of a silicone whip, the Plenty features quality stainless steel cooling coil, easy to use temperature adjustment between 266°-395°F, and has a built in double helix heat-exchange features to ensure efficient air heating, while stainless steel cooling coil ensures a pleasant aroma experience. The temperature in the filling chamber is shown on an exterior thermometer, and the bi-metallic regulator provides for safe operation.

Inside of the Plenty is an incredibly sophisticated thermodynamic system that gives the handheld vaporizer its power. The heat exchanger has a coiled, double helix shape that allows it to produce unbelievable amounts of vapor. Although the herbal vaporizer can be set to temperatures of up to 395 degrees Fahrenheit, the vapor is always cool and pleasing, thanks to a stainless steel cooling coil included in its design. A bimetallic thermostat keeps temperatures within a 3-degree accuracy range, preventing combustion and ensuring efficiency. 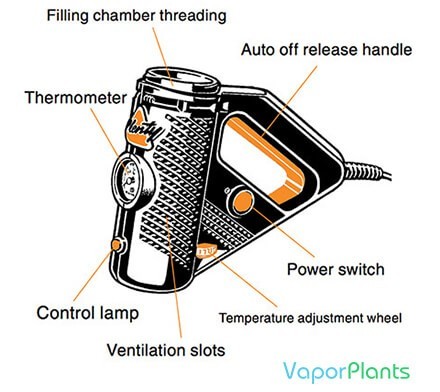 The Plenty has a big chamber, similar in size to the Volcano, more herbs yield thicker clouds. But if you think that the large herbal chamber isn't as efficient this can be quickly fixed by using the included oil pad as a spacer to press smaller amounts of herbs against the screen. This unit is a great vaporizer as 2 of the most important basics of any vaporizer is being able to produce excellent vapor and having a built to last construction - the Plenty vaporizer excels in both of these areas. Convection style heating produces vapor identical to the Volcano. The design is excellent, creating a true convection-heated vapor that is constantly cooled while travelling through the cooling coil.

Even though the Plenty vape is highly advanced in the world of handheld vaporizers, it is very simple to use. Once you have loaded your dry herbs in the filling chamber, it is ready within 90 seconds. The control light will go out to signal that it's time to enjoy. Then, all you need to do is draw through the mouthpiece. There is absolutely no learning curve!

Heating up as soon as pressing the power button and setting your temperature by choosing between seven different heat settings. As with any new vaporizer, just start out low and work your way up until you decide on a heat setting that works best for you. Going all the way up to 395°F, it can get quite hot, but it is not designed to sustain higher temperatures for long time. So before every time you are going to take a draw, just pull on the trigger to bring the temperature back up. It's a very minor thing, and what makes it a lot more like a portable vape than a desktop one. 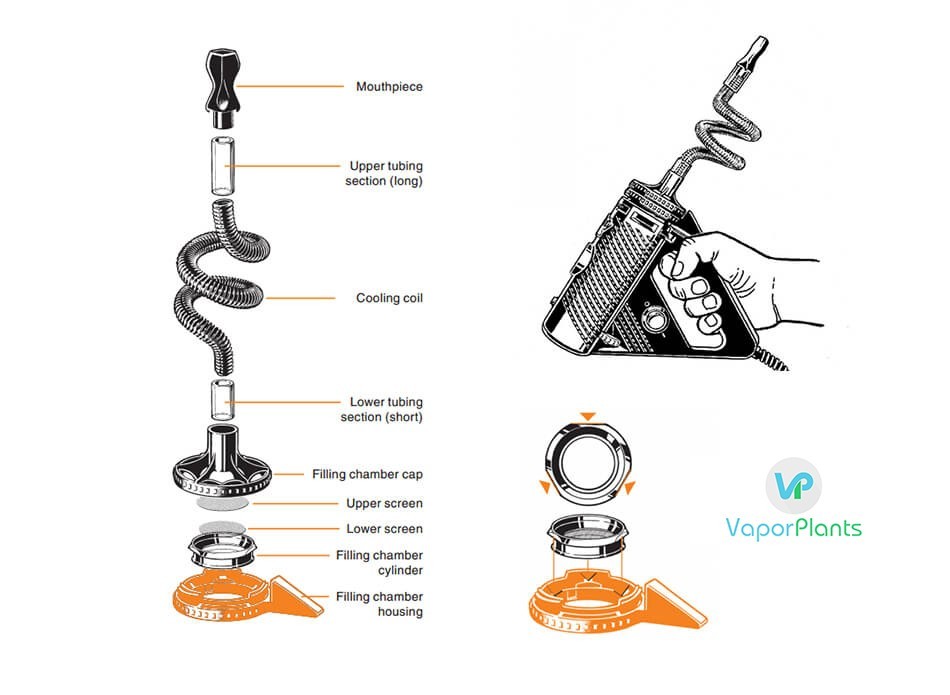 Plenty Vaporizer for Herbs, Wax, Oil. Plenty Vaporizer is another unique desktop product - so small and portable that it could almost be a portable, but it definitely has the power of the a desktop vape! Constructed in Germany by the same people who brought you the Volcano - you will love it!